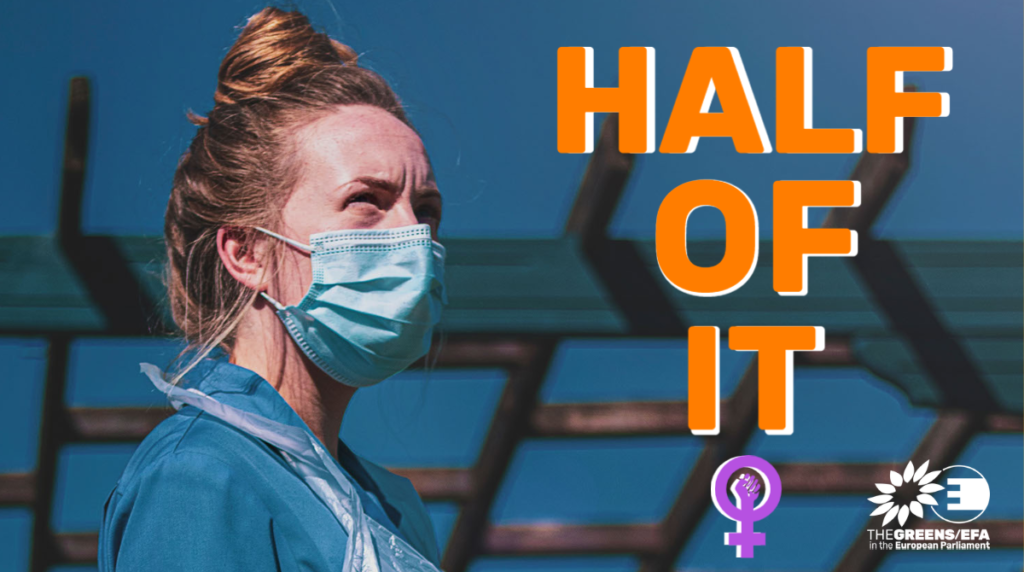 Success for the #halfofit movement: More justice in EU budgets

Months of negotiations between the EU Council, the Commission and the European Parliament on a rule of law mechanism, on the multiannual financial framework and the recovery programme for the Corona crisis have produced the decisive results this weeks – which inclusedes decisions for more gender equality. The economic stimulus package explicitly provides for plans for a fairer distribution of funds and a gender-sensitive assessment of the impact of distributed funds. The EU’s long-term budget also includes gender budgeting. This is an important step forward and success for our movement.

Since May this year, we have been fighting for #halfofit: half of the reconstruction aid should go to women because they are at the centre of the Covid 19 crisis. Thanks to the strong commitment of the Green Group in the European Parliament and a network of MEPs from all democratic parties, we have succeeded in including decisive steps and instruments in several relevant dossiers, including the Recovery and Resilience Facility (RRF).

For the lion’s share of the economic stimulus package, the Recovery and Resilience Facility, which is endowed with 672.5 billion euros, the European Parliament demands in Art. 14 and Art. 16 obligatory equality checks of the national plans, which must be submitted to the EU Commission for examination. At the same time, the plans must effectively combat negative effects of the crisis on gender equality.

Governments must therefore state clearly what effects the planned measures will have on women and men. This will ensure transparency and highlight any imbalances.

Article 16, 2c of the Recovery and Resilience Facility states the Gender Impact Assessement:

“The recovery and resilience plans shall be consistent with the Union’s Gender Equality Strategy 2020-2025, shall be based on a gender impact assessment of the planned measures and shall comprise key actions to effectively address the negative impact of the crisis on gender equality combined with measures for gender mainstreaming. The recovery and resilience plans shall also be consistent with the national gender equality strategies”.

It also states that

“The Commission shall also require a gender impact assessment of the plan carried out by an independent expert or proceed to such an assessment itself.”.

This clear objective for a gender-sensitive recovery package was agreed on Monday and will then be defended in the negotiations with the Council (trilogue).

The Multiannual Financial Framework (MFF) for the years 2021-2027 was already adopted on Tuesday (10 November 2020). The good news for us is that gender budgeting is finally to be introduced:

In plain language, this means that the European Commission must now finally develop a gender budgeting method which will be introduced for the funds managed directly by the Commission by 2023 at the latest. In three years’ time, it will then be examined whether it can be extended to the funds jointly managed with the Member States.

The door has thus been opened for gender equality to be anchored in the budget. The numerous demands have been heard, including various research papers which show why women are more affected, our own study which proved that the original crisis plan was gender-blind and many other valuable suggestions from organisations, the International Monetary Fund and the International Labour Organisation.

We will continue to advocate that this crisis should not become a “she-session”. And we will not relent in calling for more women in the EU financial institutions. It is unacceptable that Frank Elderson was elected to the Executive Board of the ECB this week – with no opposing candidate. This means that the Executive Board now consists of four men and two women, who are also the only two women on the 25-member Governing Council. This gender ratio in a body that has such immense influence, especially in times of crisis, is an indictment.